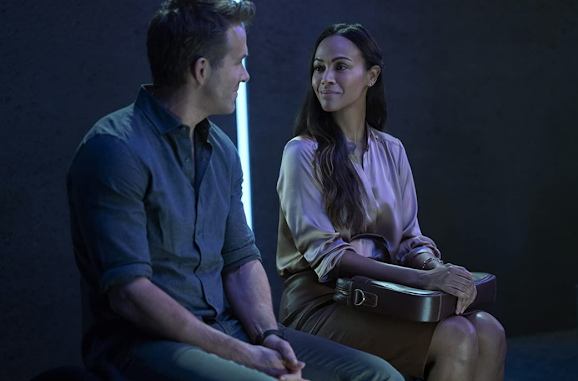 Ryan Reynolds has carved out a pretty nice career for himself playing the inveterate smart ass. That is his schtick and he’s very good at it. He first burst on the scene with the TV series “Two Guys, a Girl and a Pizza Place” with just that kind of character. And you have seen something similar in the “Deadpool” movies (of which #3 is set to start production soon), “The Croods” movies and most recently, “Red Notice,” and “Free Guy.”

His eponymous character in “The Adam Project” isn’t much different. That is a good and a bad thing.

Reynolds plays Adam Reed, an ace pilot in the year 2050. As the film opens, Adam is in his star fighter and looking to travel back in time. He apparently commandeered his fighter and is being chased by an unknown figure as he looks to create a wormhole to facilitate his escape.

He manages to make it back to the present day, injured and with his ship damaged. And where does he manage to wind up? His childhood home, which is simultaneously intentional and accidental. You see he was trying to get back to 2018 but the harrowing escape threw off his journey. The first person he sees in 2022 is himself…at 12 years old.

Reynolds plays the tall, buff leading man of course. The younger version of Adam (Walker Scobell) is quite the contrast. He is undersized for his age, asthmatic, and bullied relentlessly. But he has that sarcastic sense of humor that is typical of so many Ryan Reynolds characters.

One remarkable aspect to this film is Walker Scobell being cast perfectly. We see a budding star here. He is every bit as irreverent and sarcastic as the older version of his character. The scenes between Scobell and Reynolds are done so well and the two actors have great chemistry together.

We learn that it’s been about 18 months since young Adam lost his father (Mark Ruffalo). He and his mother (Jennifer Garner) are still coping with the unexpected loss. So when the older version of himself shows up, he has a lot of questions. Older Adam is suffering a loss himself, that being his wife Laura (Zoe Saldana). Apparently, she traveled back to 2018 for reasons unknown to him and died upon her return (no spoilers here, I swear). His personal mission is to discover what. But he must wait for his ship to repair itself (they apparently can heal on their own, like organisms) while he heals from his injuries before he can continue.

There isn’t much here that defies convention. So, as you might expect, there is that villain lurking in the background. At the very beginning of the film, we learn older Adam was escaping from Maya Sorien (Catherine Keener), an uber-powerful oligarch whose company funded the research into time travel. Seems as though she did so for reasons other than benevolence (hint: it may have to do with altering the past). Oh, and Adam’s father not only discovered time travel, he and Sorien paved the way for doing so routinely.

And as with other films that deal with the fantasy of time travel, you have all sorts of warnings about going into the past to alter the future and not coming in contact with yourself. In that respect, you might expect this to be your run-of-the-mill action flick.

But it’s that Ryan Reynolds humor that keeps reeling you in whenever you might start to lose interest. There are some really laugh-out-loud moments from Reynolds himself and Scobell. Scobell matches Reynolds line for hysterical line throughout. The kid is talented, there is no question about that, and I am eager to see more out of him.

But there are some very sweet moments – genuinely sweet and warm. There is a scene in a bar where Older Adam runs into his mother and overhears her lamenting to the bartender about the difficulty of raising her son alone. And without revealing who he is, Adam pours his heart out under the guise giving her advice. He and Garner play the scene perfectly.

The goal here for Older Adam is to do away with time travel altogether. He didn’t really want to team up with his younger self but he doesn’t really have a choice. This mission could mean disastrous consequences for him. But he is convinced that doing so is for the betterment of humanity. Whether he is able to do it is the question.

Which brings me to my earlier point about the good and bad of this film being typical Reynolds schtick. We know he isn’t a one-trick pony. In the past Reynolds has done well in dramatic roles, such as in the films “Life” and “Fireflies in the Garden.” We get it. He can do the smart-ass characters without breaking a sweat. Now I’d like to see him do more – really challenge himself and his ability. If you look at Ryan Gosling’s CV, it’s hard to find two roles of his that are alike. Now I’d like to see Reynolds challenge himself in the same way because I think the talent is there.

This is a good film. It isn’t great art of course. But as we enter a third year of the Covid pandemic and as war in Ukraine threatens to expand, this is the kind of film that is a terrific temporary escape.

Blatantly Obvious Movie Convention – I am going outside the convention of film reviews with a bit of an addendum here. I have a film question that has bothered me for decades – literally. You, too, have seen this any number of times. Scenario: One person is set to fight a group. Why does that group always attack one at a time? And before you yell at me, I know. If they were to all attack at once and overwhelm the good guy/woman, there might not be reason to continue to film. But there are smart filmmakers out there and I find it hard to believe that nobody has found a solution. Got any ideas? Share them.

Don't Look Up -- The Wrong Guy for the Job

December 27, 2021
Don’t Look Up Two stars Director: Adam McKay Stars: Leonardo DiCaprio, Jennifer Lawrence, Meryl Streep, Jonah Hill, Rob Morgan, Mark Rylance, Timothée Chalamet, Tyler Perry, Cate Blanchett, Ariana Grande. I can’t say that I’ve been a big fan of Adam McKay. He’s made his career as a comedy writer/director/producer and worked on Saturday Night Live before making the switch to feature films. Some of his comedies are pretty good, such as “Anchorman: The Legend of Ron Burgundy,” “The Other Guys,” “Step Brothers,” and “Talladega Nights: The Ballad of Ricky Bobby.” He seemed to carve out a nice niche for himself. But in 2015 his career took a turn and his films moved into the political sphere. First, he adapted the Michael Lewis book, “The Big Short” into a feature film. The film chronicled the events that led to the housing market crash in 2008. Then in 2018, he directed the Dich Cheney biopic “Vice,” which netted him a fair amount of critical acclaim. And now with “Don’t Look Up,”
1 comment
Read more

November 07, 2021
Dune Two stars Director: Denis Villeneuve Stars: Timoth é e Chalamet, Rebecca Ferguson, Oscar Isaac, Josh Brolin, Stellan Skarsg å rd, Jason Momoa, Javier Bardem, Zendaya Rated: PG-13 Running time: 2:35 I have admired director Denis Villeneuve for quite some time. His films “Sicario” (2015), “Arrival” (2016) and “Blade Runner: 2049” (2017) blend incredible art direction, cinematography, and legitimately provocative existential plots into films that not only entertain, but stretch the boundaries of the genres in which they are categorized. So when I learned that Villeneuve would try to resurrect the Frank Herbert franchise that unsuccessfully came to the silver screen in 1984, I figured the advances in special effects, computer-generated imagery and Villeneuve’s direction would surely make it at least a standout in the science-fiction genre. Well, not so much. At times it is a resounding “meh.” At others, it is head-scratchingly confounding and just downright silly.
Post a Comment
Read more