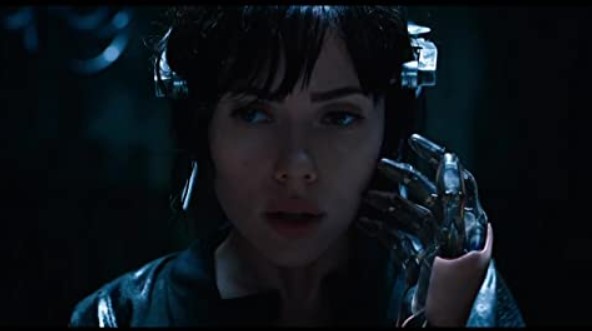 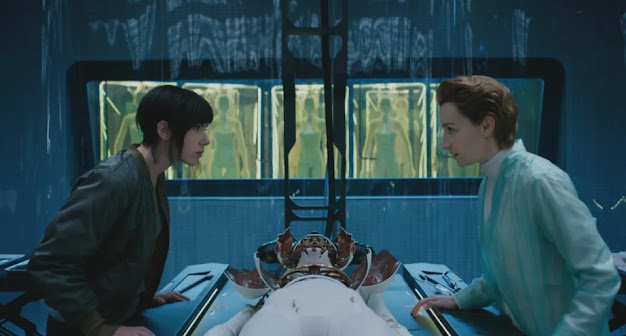 This film is part of a group of films I will call “Worth Checking Out” --  films that may not have garnered widespread critical acclaim, but I found them to be worthwhile despite their flaws. The pandemic hasn’t quite subsided enough that we can flock to theaters en masse. So if you’re still staying in and can find one of these films in your streaming service, give these a look.

I haven’t often been impressed by films that center around cyborgs. You’re familiar with the term cyborg: cybernetic organisms. Part human, part robot. But “Ghost in the Shell” sets itself apart. It not only benefits from better computer generated graphics than previous films in the same genre, but the enhanced visual technology affords the filmmakers an opportunity to tell a different story – one that allows us to picture the possibilities of technologically enhanced humans. Some of those possibilities are good, some are the stuff of nightmares.

We aren’t quite sure when this film takes place. There are some elements to it that we are familiar with: Architecture, weapons and vehicles look similar to today. But the tech that allow humans to be enhanced suggest that this takes place far further in the future than at first glance.

Technologically enhanced humans are the norm here, not the exception. Enhancements or “mech,” as the tech is called here, are wide ranging. They can be as simple as a mechanical organ of some sort (one character receives a “mech liver” so it’s last call every night), to a completely mechanical body connected to an actual brain.

The latter is the case of protagonist Major (Scarlett Johansson). We are told she arrived in future Japan as a refugee but her boat was attacked. Only her brain survived. And a company called Hanka Robotics made an experiment out of her. She is now a super weapon for federal law enforcement.

When she is injured on assignments, Major goes back to Hanka to be repaired and regenerated. But she starts to experience visual anomalies. Are they some sort of glitch in the code or perhaps repressed memories of some sort?

Major and her team’s priority is finding the mysterious hacker (humans can be hacked as though they are a laptop or smartphone) named Kuze (Michael Pitt), who is targeting and killing Hanka Robotics scientists.

There is an existential premise here reflected in the title. A person’s “ghost” is their soul. And as cyber enhancements become more prevalent in this setting, the implication is humans run the risk of losing their ghosts. Major tackles her role as though she is more tech than human, built not born. But personally, she struggles with who or what she really is. Her superior, Aramaki (Takeshi Kitano), reminds her that once humans regard their uniqueness as a virtue, then they have peace. And Major is unique, the only one of her kind.

As the film progresses, Major continues to experience her visual glitches. She admits that as she tries to remember the specifics of her past, there is a thick fog in her mind and she can’t make her way through it. And her encounters with Kuze frustrate her further. He teases her with information about the two of them and where they really came from. Major’s behavior becomes more unpredictable to the point that Hanka’s CEO, Mr. Cutter, wants to terminate her and create another.

This film is flawed, no doubt. That starts with the casting. At the time of the film’s release in 2017, Scarlett Johansson was criticized for being a Caucasian cast in a role that was clearly Asian in the original comic. And, as a matter of fact, there are several non-Asian actors cast here. I understand the practicality of casting Johansson. Without a big name associated with this film, it would not have attracted American audiences. But I have a hard time thinking there wasn’t a compromise to be made here.

Casting also brings up another flaw. The role of Aramaki, the head of the law enforcement team Major is part of, is played by Takeshi Kitano. He speaks Japanese to everyone, and they speak English to him. And everyone understands each other. So why not have Aramaki speak English. I don’t know the reason behind this casting or this choice to have the differences in language, but it was distracting. Was the casting director not able to find an Asian actor who speaks English? I find that rather hard to believe.

Despite those drawbacks, the visual aspect of this film is spectacular and its greatest feature. It is a captivating view of the future, similar to “Blade Runner 2049.” It can be dark and bleak in some cases, and bright and colorful at others. As Major chases Kuze through the bowels of the city, it is dark and wet. But this isn’t a turn off. The cinematography here evokes artistry as well as atmosphere. And you contrast that to the bright lights and the wildly colorful holograms that hover over the city and you really appreciate the work Jess Hall, the director of photography here, has done.

As many theaters continue to stay closed, many of us need the escapism that film affords. And while “Ghost in the Shell” isn’t a great film per se, it might just be the kind of entertainment needed on a night at home.

January 31, 2021
Wonder Woman 1984 Two stars Director: Patty Jenkins      Stars: Gal Gadot, Chris Pine, Pedro Pascal, Kristen Wiig, Robin Wright, Connie Nielsen Running time: 2hr 31min For a long time I have been behind giving female characters in the superhero genre of movies more of the spotlight. I have wanted to see male characters step back, relegated to second-tier status, and let their female counterparts shine. We have seen this more and more. Not only has Wonder Woman had two feature films, we have seen characters like that of Regina King in “Watchmen” take center stage and Scarlett Johansson’s Marvel character “Black Widow” will get her own film in 2021. Women are getting greater attention in this genre, as it should be. What is particularly distressing is when a script subtly, but significantly, undercuts this progress, which is the case with “Wonder Woman 1984.” It gives the impression that the wheels of equality in Hollywood are turning more slowly than we would like to bel
5 comments
Read more

February 06, 2021
Ah 2004, we remember it well, don’t we? Texting on flip phones and having to press one key three times to get the letter we wanted. “Friends,” “CSI,” and “ER” were still on network television in prime time. Janet Jackson had her infamous “wardrobe mishap” during the halftime show at the Super Bowl (won by the New England Patriots). The Boston Red Sox won the World Series, the Tampa Bay Lightning won the Stanley Cup and the San Antonio Spurs won the NBA Championship. And ultimately John Kerry would lose the Presidential election to incumbent George W. Bush. The U.S. was still mired in the War in Iraq, the Abu Ghraib prison scandal was uncovered, former President Ronald Reagan died and dial-up Internet was on its way to extinction.   The top films at the box office were (according to Box Office Mojo): 1. Shrek 2 2. Spider-Man 2 3. The Passion of the Christ 4. Meet the Fockers 5. The Incredibles 6. Harry Potter and the Prisoner of Azkaban 7. The Day After Tomorrow 8. The Polar Expre
3 comments
Read more

The dystopian genre gets a shot in the arm

January 31, 2021
Blade Runner 2049 2017 Four stars Director: Denis Villeneuve Stars: Ryan Gosling, Harrison Ford, Jared Leto, Sylvia Hoeks, Robin Wright. Runtime: 2hrs 44 mins We know that dystopian cinema includes fascinating works of art. Films like “Brazil,” “A Clockwork Orange,” and “Moon” aren’t just some of the best of the genre, they are some of the best regardless. But does their premise make them fundamentally incapable of being beautiful in every sense? Can something so ostensibly bleak, dark and pessimistic also be alluring and elegant? Unequivocally, yes. And you can add “Blade Runner 2049” to the mix. Director Denis Villeneuve takes us to Los Angeles 32 years in the future (from the release of the film). The planet is vastly overpopulated, ecosystems have collapsed, and famine is widespread until an industrialist named Niander Wallace (Jared Leto) invents synthetic farming. In the original “Blade Runner,” synthetic humans known as replicants were engineered with superior strength and exp
3 comments
Read more