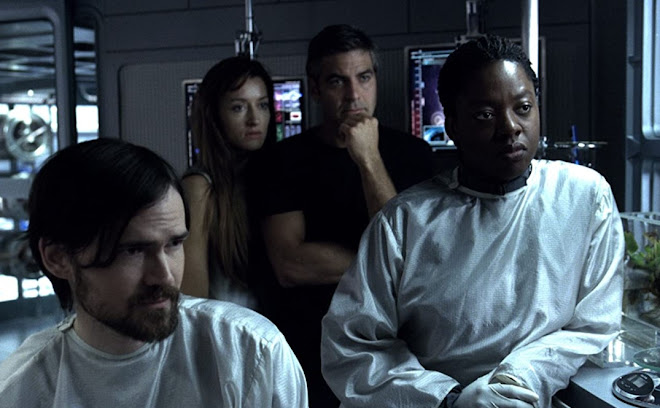 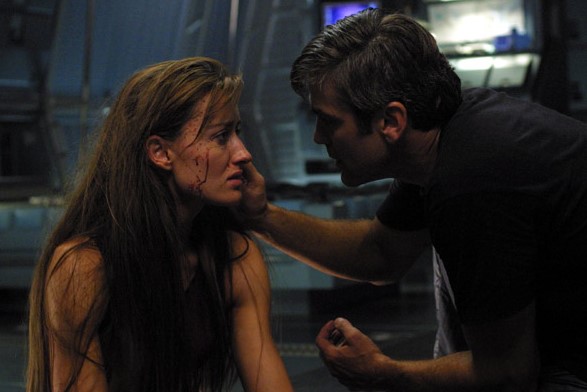 Director: Steven Soderbergh, based on the novel by Stanislaw Lem

With the opening scenes of “Solaris,” the mood is unquestionably somber. George Clooney plays Dr. Chris Kelvin, a psychiatrist who seems to be just going through the motions. One of the first scenes is him just sitting in bed alone. Many will recognize in his body language as one of those times where something weighs on our minds so heavily, it is a Herculean effort just to get up and begin the day.

Much of this film is shot in dark, muted colors to further enhance the overall tone. Make no mistake, science-fiction is the vehicle here. But this is a psychological/existential thriller, if we must assign labels.

Kelvin is visited by two strange men who are part of a private company that has taken over a mission from NASA. Kelvin’s friend, Dr. Gibarian (Ulrich Tukur) and a small crew are aboard a space station orbiting the planet Solaris. Gibarian has sent a cryptic video message to Kelvin specifically, imploring him to come and help with a problem aboard the space station. The company the two men represent is studying the unique planet as a possible source of energy.

What we discover soon after Kelvin arrives aboard the station is that two crew members are dead, including Gibarian, and the remaining two crew members, Snow (Jeremy Davies) and Dr. Helen Gordon (Viola Davis) are unnerved by something. Gordon sequesters herself in her room and Snow is disconnected from reality. They are understandable reactions to something that defies comprehension.

The planet is able to somehow get into the minds of the crew. It intuits who is on the minds of crew members and then reproduces them in their corporeal form. We learn that each crew member has a “visitor.”

Kelvin isn’t immune from visitation. The first night aboard the station, he dreams of his deceased wife Rheya (Natascha McElhone), and the first day they met at one of Gibarian’s parties. But as he dreams of making love to her not long after they first met, director Steven Soderbergh then intersperses the scenes at the party with short cuts of Rheya and Chris together on the ship. The suggestion here is that dream and reality become intertwined and Kelvin is delirious enough that he can’t tell the difference. At this point in the film, you have to wonder whether the planet is able to deliberately blur the distinction between the two.

When Chris wakes up and is coherent enough, he realizes that what he thought was a dream about making love to Rheya aboard the ship was real. Clooney’s looks of pure sorrow, grief and confusion are extraordinary. This was one of the first times I realized how good an actor Clooney could be.

Rheya can’t remember specifics about her life and her time together with Chris. The only things she seems to remember are the times she shares with him. She has no memories of her life before she met Chris.  She sees images in her mind, and they are familiar to her, but she can’t provide context to any of them. That’s because they are Chris’ memories, not hers. His memories have been transplanted into her mind.

She is self-aware, though. At one point she acknowledges she isn’t the person she remembers. At one point she asks him “don’t you love me anymore,” as if she knows something significant has happened between them but isn’t quite sure what.

Half-way through the film, I pondered why the planet would do this. Is it that the planet is actually a living being? If this space company goes about trying to harvest the planet for energy, does the planet do this as a defense mechanism to ward off any threats? It seems plausible. In one of the flashback scenes to Gibarian’s party, he mentions that the planet seems to react to being observed. Species have evolved to develop defense mechanisms to protect them from predators. If that is the case here, there is elegance in the simplicity of this defense mechanism as opposed to some sort of violent reaction.

Chris knows intellectually that this woman who looks, talks, and acts like his deceased wife can’t really be her. So he is left with a painful decision what to do about her and the rest of the crew. With this version of Rheya, we are left to question ourselves as to whether we really truly know someone even though we get very close to them.

“Solaris” doesn’t take any easy outs as it marches toward its conclusion. And as it approaches the end, I found myself really questioning the entity that was Solaris. The possibilities seemed to grow as the film wound down. I asked myself whether the planet itself had a consciousness or was it acting solely on instinct. And then I began to wonder if the planet was actually some sort of omnipotent being. I saw many similar existential/philosophical questions in another fantastic science-fiction film, “Arrival.”

Despite raising more questions for me than providing answers,  “Solaris” is a remarkable film with an ending that is open-ended but still satisfying.

January 31, 2021
Wonder Woman 1984 Two stars Director: Patty Jenkins      Stars: Gal Gadot, Chris Pine, Pedro Pascal, Kristen Wiig, Robin Wright, Connie Nielsen Running time: 2hr 31min For a long time I have been behind giving female characters in the superhero genre of movies more of the spotlight. I have wanted to see male characters step back, relegated to second-tier status, and let their female counterparts shine. We have seen this more and more. Not only has Wonder Woman had two feature films, we have seen characters like that of Regina King in “Watchmen” take center stage and Scarlett Johansson’s Marvel character “Black Widow” will get her own film in 2021. Women are getting greater attention in this genre, as it should be. What is particularly distressing is when a script subtly, but significantly, undercuts this progress, which is the case with “Wonder Woman 1984.” It gives the impression that the wheels of equality in Hollywood are turning more slowly than we would like to bel
5 comments
Read more

February 06, 2021
Ah 2004, we remember it well, don’t we? Texting on flip phones and having to press one key three times to get the letter we wanted. “Friends,” “CSI,” and “ER” were still on network television in prime time. Janet Jackson had her infamous “wardrobe mishap” during the halftime show at the Super Bowl (won by the New England Patriots). The Boston Red Sox won the World Series, the Tampa Bay Lightning won the Stanley Cup and the San Antonio Spurs won the NBA Championship. And ultimately John Kerry would lose the Presidential election to incumbent George W. Bush. The U.S. was still mired in the War in Iraq, the Abu Ghraib prison scandal was uncovered, former President Ronald Reagan died and dial-up Internet was on its way to extinction.   The top films at the box office were (according to Box Office Mojo): 1. Shrek 2 2. Spider-Man 2 3. The Passion of the Christ 4. Meet the Fockers 5. The Incredibles 6. Harry Potter and the Prisoner of Azkaban 7. The Day After Tomorrow 8. The Polar Expre
4 comments
Read more

The dystopian genre gets a shot in the arm

January 31, 2021
Blade Runner 2049 2017 Four stars Director: Denis Villeneuve Stars: Ryan Gosling, Harrison Ford, Jared Leto, Sylvia Hoeks, Robin Wright. Runtime: 2hrs 44 mins We know that dystopian cinema includes fascinating works of art. Films like “Brazil,” “A Clockwork Orange,” and “Moon” aren’t just some of the best of the genre, they are some of the best regardless. But does their premise make them fundamentally incapable of being beautiful in every sense? Can something so ostensibly bleak, dark and pessimistic also be alluring and elegant? Unequivocally, yes. And you can add “Blade Runner 2049” to the mix. Director Denis Villeneuve takes us to Los Angeles 32 years in the future (from the release of the film). The planet is vastly overpopulated, ecosystems have collapsed, and famine is widespread until an industrialist named Niander Wallace (Jared Leto) invents synthetic farming. In the original “Blade Runner,” synthetic humans known as replicants were engineered with superior strength and exp
4 comments
Read more